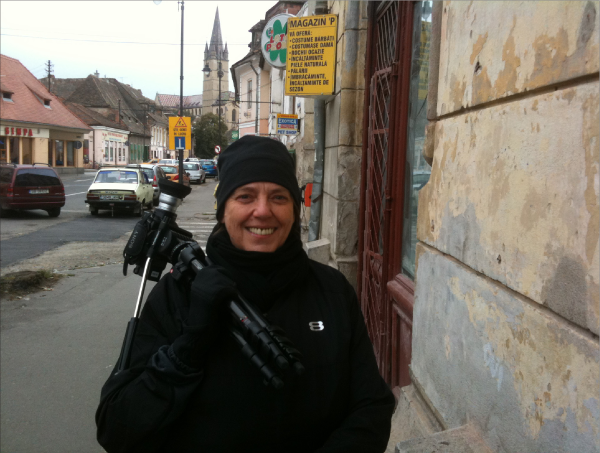 Sharon Karp and I have been working on various projects together since 1996. She edited my first short video pieces that were part of larger installations. Working on these projects over the years we became friends. It was Sharon who encouraged me to go back to my native country, Argentina, to examine the long-term effects and repercussions of Argentina’s 1970s state terrorism. The result is the film Burnt Oranges—my first feature documentary essay that re-maps thirty years of obscured Argentinian history. Burnt Oranges gave us the opportunity to experiment with integrating different layers of complex narratives in film.

When Sharon asked me to collaborate in telling the story of her family, I didn’t think twice. While I am not Jewish, I have been exposed to the stories and images of Nazism since childhood. I remember when Adolf Eichmann, who was then living in Argentina, was captured. In the news, images of the concentration camps and the horrors of Nazism were shown constantly. At the same time, it was known that Josef Mengele was practicing medicine in the outskirts of Buenos Aires. I recall seeing the images of his bizarre and nauseating experiments on children. I was so affected by these images that I was afraid of playing on the street fearing that Mengele might take me.

From my personal history, having lived through the years of censorship and terror of the genocidal “Dirty War,” I empathize with the emotional landscape of the holocaust survivors. Working on A Song For You, I have had the opportunity of participating in the recovery of a marvelous story of survival, creativity and love.

SILVIA MALAGRINO is an international award-winning artist, and filmmaker native of Buenos Aires, Argentina. She works with different mediums—photography, digital video, language, light and sound—to represent not only issues of historical and cultural relevance but also to explore in depth the fancies, the intricacies, and the idiosyncrasies of the personal imagination.

Ms. Malagrino is a recipient of numerous grants and awards including a 2010 Guggenheim Fellowship, The National Endowment for the Arts Creativity Grant 2004, the Illinois Arts Council Artist’s Fellowships (2004/2000/96/93/89/87); The National Endowment for the Arts Regional Fellowship (87); and she was nominated for the Infinity Award of the International Center for Photography (98). Her works, which have been exhibited widely in the United States, Latin America and Europe, are include din the Collections of the Art Institute of Chicago; the Milwaukee Art Museum;La Bibliothèque Nationale de France, Paris, France; and the Fundaçao Athos Bulçao, Brazil, among many others.

In 1998 she created the poetic feature-length documentary titled Burnt Oranges. The film addresses the long-term effects and repercussions, personal and social, of Argentina's 1970s state terrorism. Burnt Oranges received wide acceptance, and generated national and international venues of interconnectivity between different communities–artistic, academic, human rights, Latin American,and the general public. In 2005 Ms. Malagrino received the Lorenzo De Medici First Prize Award in Media at the 5th Edition of The Florence Biennale. Recently, she was awarded with the State of Illinois Distinguished Artist award for her contributions to Art and Society.

Malagrino is Professor in Photography at The School of Art and Art History of the University of Illinois.