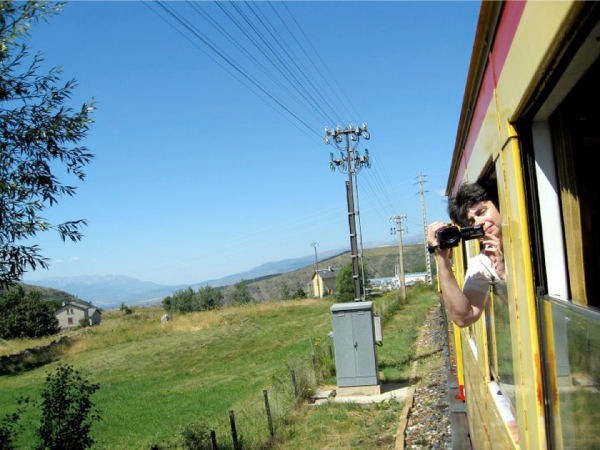 SHARON KARP SHOOTING IN THE PYRENEES

I always knew I would make a film about my family’s escape from the Nazis: their flight across the Pyrenees from France to Spain, “running by night, hiding by day,” my mother wearing only high-heeled shoes. It was a story my mother told over and over, their monumental accomplishment, crossing to freedom with the help of the Maquis, the French Resistance.

I became a documentary filmmaker in my early twenties, and worked primarily on films about peace and justice. After the death of my parents, I found maps and documents among their belongings that brought a new reality to their story. Suddenly everything was real. How had my family survived when so many had perished? I felt compelled to finally begin making a very personal film about my own family.

My sisters and I went to Europe to see for ourselves what my parents were talking about all those years. I also needed footage for my mother’s interviews and my father’s memoirs.

It has taken seven long years to make this film. During the process, I was forced to confront my own trauma as a child of survivors. I also discovered that the miracle of my family’s survival was achieved through strength of will, a lot of luck, and the help of other people who risked their own lives.

SHARON KARP is a founding member of the Chicago-based film collective Kartemquin Films. Since 1974 she has been involved in the production of independent films. In 1995 she formed her own video and post-production house, Media Monster.

Among her award-winning films are the 1986 Emmy-nominated SILENT PIONEERS, and the Chicago Film Festival Silver Hugo Winner THE CHICAGO MATERNITY CENTER STORY. Ms. Karp was an editor on the Kartemquin-produced VIETNAM:LONG TIME COMING. In 2001, Ms. Karp edited VOICES OF THE GENIZA: PORTRAITS FROM MEDIEVAL CAIRO, for a multimedia exhibition at the Spertus Museum in Chicago. VOICES won the bronze medal in the prestigious MUSE awards. Another project for the Spertus was A FORCE FOR CHANGE, a film for the exhibit about the Julius Rosenwald Fund and its support of African American artists,writers, teachers, and scholars. Additional award winning projects include THE INNOCENT, a film about men and women wrongly sentenced to death;

BURNT ORANGES, a film about state terrorism in Argentina during the 1970s, and STANDING SILENT NATION, chronicling the struggle of a Lakota Indian family to develop a hemp industry on the Pine Ridge Reservation in South Dakota in order to become economically self-sufficient.

Recent projects include BE FILLED WITH THE SPIRIT: STOREFRONT CHURCHES, a look into the traditions of black storefront churches as photographed by Milton Rogovin; PICTURE MAN: THE POETRY OF PHOTOGRAPHER MILTON ROGOVIN, the social documentarian who for nearly forty years photographed people around the world, focusing on men and women at work; and NEVER TURNING BACK: THE WORLD OF PEGGY LIPSCHUTZ, the story of one woman’s unwavering commitment to art, peace, justice and social change. The film won the Cine Golden Eagle award in 2009. The latest feature documentary she edited, CRYING EARTH RISE UP, is a portrait of the human cost of uranium mining and its impact on sacred water.